Feds seize MyRedBook in CA How about Backpage?

Home/Blog/Feds seize MyRedBook in CA How about Backpage?
Previous Next

Some sex workers in disappeared in California because they can not visit SFRedbook.com, MyRedBook.com right now. You’ll only find the seals of the law enforcement agencies—the FBI, the DOJ, and the IRS—that seized the sites as part of a prostitution and money laundering investigation. As a big escort service website, I think Backpage could be a big issue on escort service posting, and backpage is larger than MyRedBook, so you know who next one is.

This is so sad. Very few of the people on that website were underage, most of the people who were on that site were adults. A lot of sex workers can’t find or keep a real job for long due to having a criminal record, lack of education, or an inability to get along with people. There is no end to this line of work, it will always be around. Many of America’s longtime military allies such as Israel, Germany, France, Australia have made sex work legal, it’s a shame it can’t happen here in America, which already has the highest jail / prison population in the whole world. Most of them are there for non-violent crimes. ﻿

The seizure is part of a disturbing trend of targeting sex workers, but more than that, it is an attack on the rights to free speech and free association exercised by a diverse group of people, many of whom have nothing to do with the alleged crimes.

MyRedBook and its companion sites served a large and diverse community of sex workers. The sites functioned as social media platforms, with discussion boards for users in topics from politics to financial tips. It also served as a resource guide with information ranging from explanations of the law as it pertains to sex work to health information. For archived versions of the forums sex workers no longer have access to, click here.

These sites were essential tools for First Amendment protected speech and association—especially important for a community that values its privacy for a variety of legitimate reasons. This platform has been pulled out from under the feet of this community. As the Bay Area Sex Worker Outreach Project (SWOP) said in a statement:

Today we also lost extensive online forums for a community of sex workers to keep each other safe, screen clients, and blacklist predators. Myredbook also hosted resource guides for sex workers who were struggling and created a venue for community counseling for those in need. Many local outreach organizations used this forum to connect with vulnerable sex workers. 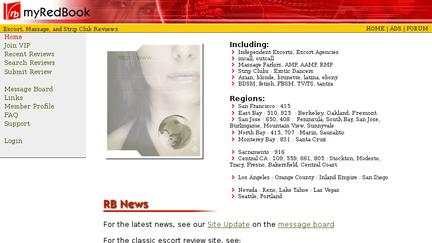 To compound the destruction of this indispensible forum, the users of these sites now have cause to worry that their private information, such as IP addresses, phone numbers, and email addresses, may be in the hands of the FBI. In fact, news reports specifically note: “

EFF has always supported freedom of association and free speech, no matter who is doing the talking. In fact, these rights are especially important for controversial groups. That’s why we are so concerned to see these sites shut down—especially on the heels of the bank account closures of sex workers nationwide.

It’s true that in many states, some forms of sex work are illegal. But escort workers have First Amendment rights to speak out about the issues that concern them, to advocate for changes in the law, to counsel each other, to discuss the issues that are important to them, and to advertise legally permissible services. And sex workers have First Amendment rights to associate with each other on Internet forums and elsewhere.

As society changes, its values and laws change as well. But the oppression of disfavored groups uses the same tactics. Today, NY escort workers are being oppressed, but it will be a different group tomorrow. When we allow any group to be silenced and targeted, we are paving the way for it to happen again.

EFF is keeping an eye on what happens in the case, and the ripple effect in the sex worker community as the criminal charges associated with this seizure move forward. In the meantime, we’ve compiled a list of resources and strategies sex workers can use to protect their anonymity.

It takes about 3 minutes to make a reservation by phone call. Wait relax until our girl get there.

First of all, please click a girl’s photo to see her profile and escort info.

If you are staying at a hotel, please tell us the name of the “hotel, the room number and your last name”.

We call back or send a message after we estimate arrival time. If you stay at a hotel, we call to your hotel room.

Please spend a sweet time like true lovers. We would like you to have a special memory in New York.

When a guy is interested in having a lovely lady be his companion for the evening, he may take a look at sites like New York Backpage to find someone who would be accommodating. While this service is nationwide, it is often the worst route to go when visiting a large city. There are several women using this site to promote themselves, however, the woman who shows up for the date may be less than what is expected. This is a very risky route to take when looking for a professional escort.

Consider hiring an escort from a reputable service like our company instead. We take pride in having women who are guaranteed to give you the time you expect without any stipulations or hidden agendas in the process. Taking away the risk will make your entire time enjoyable rather than worrisome! We back up our escorts 100% and believe you will be happy you selected a legitimate service rather than the scary New York Backpage experience.

If you want to find a trusted escort in NYC, you should read “Safety Tips for Choosing New York Escorts” and follow this advice.